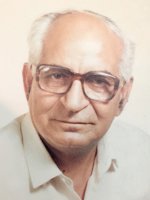 Born in Behra Pakistan, he dedicated his life to the Indian Military. He took early retirement at the age of 48, so he could raise his children left behind by his beloved wife.  He immigrated to Canada in 1988 and continued to work until age of 75.  In the later years of his life he traveled between Canada and India to ensure he spent a fair share of time with all his family.

Som Nath Chhibber had a passion for watching sports, and relaxing in the sun. He had an undeniable sweet tooth that he passed along to both his children and grandchildren.

Som Nath, was extremely loving, and proud of his five children and their spouses, Ramesh and Renu, Madhu and Vimal, Sushma and Sunil, Sunil and Ratna, Bina and Sapan. He is also survived by his two brothers, nieces and nephews, grandchildren, great-grandchildren, as well as his many loving extended family and friends.

He was man of few words, but his family did not doubt his love and affection.

To send flowers to the family or plant a tree in memory of Som CHHIBBER, please visit Tribute Store
Wednesday
2
August